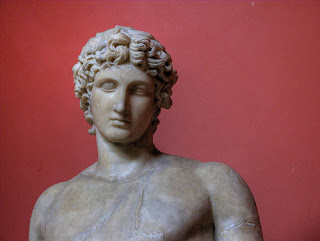 
Apollo in Myth: A Synopsis


Apollo was the great Olympian god of prophecy and oracles, healing, plague and disease, music, song and poetry, archery, and the protection of the young. He was depicted as a handsome, beardless youth with long hair and various attributes including: a wreath and branch of laurel; bow and quiver; raven; and lyre.

The most famous myths of Apollon include:

■His birth on the island of Delos;
■The slaying of the serpent Python which guarded the oracular shrine of Delphoi;
■The slaying of the giant Tityos who attempted to carry off the god's mother Leto;
■The destruction of the Niobides whose mother had offended Leto with her boasts;
■His music contest with the satyr Marsyas who lost and was flayed alive;
■His love for the youth Hyakinthos who was killed by a discus throw and transformed into a flower;
■His love for the nymph Daphne who fled from him and was transformed into a laurel tree;
■His love for Koronis who was slain by Artemis for her infidelity;
■The murder of the Kyklopes who had forged the lightning bolt used to destroy his son Asklepios;
■His service as bondsman to the mortal Admetos;
■His struggle with Herakles for the Delphic tripod;
■The Trojan War in which he brought plague to the Greeks and helped Paris slay Akhilleus.

The favored son.  He was emotionally distant and mentally active, into words, negotiations, and commerce, well-traveled, but avoided physical conflict.  Apollo never had a wife or consort.  He was the patron of medicine, the instigator of Know Thyself, Nothing in Excess style thinking, favored thinking over feeling, distance over closeness, objective assessment over subjective intuition, sought clear definitions, valued order and harmony, and preferred surface over underlying appearances, not a dreamer, wanted to go, accomplish and win, All-American, minimal humility, fair-haired son (but never quite made it to the top), out of touch with feelings, preferred Bach, brother to his siblings, valued prudence, avoided physical danger, unriled by emotions, and preferred being an observer, ideal organization man, lacked passion with respect to women (not a lover) and preferred to control women (particularly psychic women who were his opposite), pursued in order to possess (rather than woo), could be underhanded, narcissistic, arrogant, and unable to be intimate.  George Bush (reminds women of their first husbands).  Unsuccessful in love, not sexually spontaneous.  Mother was probably physically undemonstrative.  His life mission was “I will reveal to mankind the exact will of Zeus.”  When he rose above his competence, trouble occurred -- he was unprepared to fail or falter.  When he defeated a rival, he showed no mercy.  A streak of cruelty, exercised within his legal rights.  To grow, Apollo needed a streak of Dionysus (a place for him to be honored, as at Delphi for 3 months).  “The woman who most needs to be liberated is the woman inside every man.”

The best judge of them all is the King of Swords, because he can take any situation, look at it with total impartiality, and then render a decision that is both fair and insightful. He has powerful emotions, much more so than the other Swords court cards, but he keeps them under control and uses them for the best possible purposes. The King of Swords is the figurehead of government, law, administration and all the duties associated with his suit. A King of Swords is a man of the highest ethical standards. He is totally incorruptible, a pillar of strength who gives sound advice to everyone, no matter who they are. Though not the same as the King of Wands, the King of Swords is a leader in his own way. His command style is more like a general than a governor. He does not inspire people, he commands them, and they obey him because they trust him. His decisions are almost always the right ones, because he sees the big picture and never lets his heart sway his judgment. Though they might not benefit the King directly, his decisions are always in everyone's best interests. But the King of Swords is not a passive leader who sits back and gives orders while never doing anything himself. All generals were soldiers once, and the King is no exception. He is very active, and when he thinks it is necessary his will be the blade that draws first blood. This is especially true when someone commits an act that goes against the King of Swords' ethics. He is totally intolerant of those who break the law (or rather, those who break his law) and his retribution is swift and severe. He has no real empathy for others, and he does not care for their well-being. He leads them not because he wants to, but simply because he can.

When this part of you starts to manifest you'll know it right away. He does not linger waiting for something to do; he appears only when he is needed to drive raging emotions from you, or when his impartiality and cold judgment will help you solve a problem. For a moment, your head is clear and you can see things in a different light. Judge fairly, speak truth, and never waver from your standards.

The Hierophant represents and institutions - he rules beliefs, religious and otherwise. His is the power of the group and the society, who change the world to fit their beliefs. The same theme of control and change that first appeared with the Magician continues here in its fifth iteration; now there is still a well-defined leader, but the people do not follow him because they are ordered to. They follow because they are part of the group. The main philosophies of the Hierophant are that there's no "I" in "team", and that the good of the many outweighs the good of the one.

Such a philosophy may seem unnecessarily restrictive but, as the Emperor has taught us, restriction leads to order. The Hierophant is charged with the maintenance and propagation of tradition and conventional beliefs, and anyone who goes against these beliefs is shunned. Balance and conformity are the goals of the Hierophant, and neither positive nor negative is emphasized - only tradition matters. In extreme cases, this can indeed have very negative effects (as Galileo found out) but in most cases having some tradition to follow is beneficial. On a more personal level, the Hierophant is also a teacher or a mentor. One major roles of a spiritual leader is to initiate others into the community and teach them the ways of the group. The traditional way of doing things must work most of the time, or else it wouldn't have been around long enough to become tradition! However, when an idea is proven wrong it is certainly time for a change. The true Hierophant is one who has a deep respect for his beliefs, but who will not blindly follow them to his own ruin.