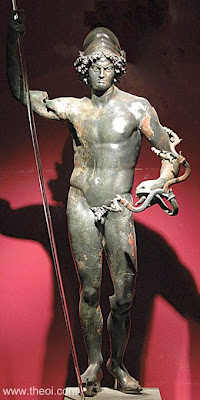 
Ares in Myth: a synopsis

ARES was the great Olympian god of war, battlelust, civil order and manly courage. In Greek art he was depicted as either a mature, bearded warrior dressed in battle arms, or a nude beardless youth with helm and spear. Because of his lack of distinctive attributes he is often difficult to identify in classical art.

Some of the more famous myths featuring the god include:
* His adulterous affair with Aphrodite in which the pair were trapped in a net laid by her husband Hephaistos;
* The slaying of Adonis, his rival for the love of Aphrodite, in the guise of a boar;
* The transformation of Kadmos of Thebes and his wife Harmonia into serpents;
* The murder of Hallirhothios to avenge his daughter's rape and his subsequent trial in the court of the Areiopagos;
* The arrest of Sisyphos, an impious man who kidnapped the god Death;
* The battle of Herakles and Kyknos in which the god intervened in support of his son;
* His support of the Amazones, warrior daughters of the god;
* His capture by the Aloadai giants who imprisoned him in a bronze jar;
* The Trojan War in which he was wounded by Diomedes in battle with the help of Athene.

A he rejected son.  He was physical, manual rather than mental, and motivated by emotions -- did not use his mind or words.  “Ares could be stirred to fight by rage or loyalty, using weapons for a destructive purpose.”  Often ridiculed or called names by others, his self-esteem was affected.  He was the son of a devalued, angry, impotent mom.  Ares is the image of masculinity, physical power, intensity, and immediate action; dancer and warrior, lover, loyal, in touch with his feelings and his body (good for lovemaking), often uncontrolled and irrational, brawler, emotional, protective of his children, assertive, active, embodied, reacted before thinking, capable of licking his wounds and going on, success often depended on luck (which then became a surprise to everyone, including himself), here-and-now, most compatible lover for Aphrodite, exuberant lover, neither planed on marriage nor avoided it, generous father, impulsive, lost out to his siblings, discouraged, and repressed.  As a developed lover, he was a man who loved to make love, a man who loved women’s bodies, a man who could spend hours making love, a man who preferred a grownup, sexually liberated woman who enjoyed sex as much as he.  In the patriarchy, his fate was often sealed by mid-life.

There is no card in the Tarot that portrays such daring and enthusiasm as the Knight of Wands. His energy and courage are boundless, and he has no fear of anything; while this sometimes serves to get him into trouble, these are also the means by which he can free himself from any detrimental situation. There are few times when he does not move with the speed of a flash of lightning. When he rides into the area he always kicks up dust behind him. Such a person shares his spontaneity and kinetic outlook on life. Though he may seem gruff or even violent at first glance, underneath that armor he wears a warm and generous heart. He will be highly supportive of those he considers friends - and you'd be surprised how high that number can go! He typifies the "knight in shining armor" prototype because he is always swooping into situations, saving the day and then moving on to the next adventure. This suddenness hides a deep sense of morality and honor; he is always ready to protect those who cannot defend themselves. But he cannot stand to stay in one place for long; there is always more to do.

If the Knight of Wands shows energy within yourself that you have to bring to the surface, doing so shouldn't be very difficult. In fact, keeping it in may be harder than letting it out, so you probably shouldn't attempt to fight it at all! Your confidence levels will rise to the surface along with the Knight's energy, and you'll feel ready to take on the world. Tackle any and all challenges that come into your path, and always be ready to help others who lack your determination and exuberance. Take the torch he offers you and step into the light of your own strength.

"The embodiment of aggression… the god of war and strife, the restless and turbulent lover, thriving on conflict and rejoicing in the delight of battle. In Ares we see our own aggression raw and bloody, before civilization tempered or repressed it.”

The Devil is probably the only card I think James Rioux got wrong - he definitely takes the Western/Greek view of Ares as an out of control monster, but Ares has a light side as well as a dark side, and the Devil is like Death in that it's misunderstood by the Zeus culture that hates what is represented by the Devil as much as Zeus hated his son Ares. Like Ares, The Devil is fundamentally the card of the instinct, and passion. It can be dangerous and violent but it's feared and hated even when it's not. The Devil is the instinctive power of the Id: symbolically its a mirror for Aphrodite's The Lovers and Ares himself is a match for her. And, unlike the Heirophant (which it also mirrors,) The Devil is instinctive, not intellectual - it doesn’t use reason, knows no restraint. Doesn’t know what is right, reacts emotionally. Motivated by loyalty or retaliation to the exclusion of logical reasoning. Doesn't see life as a game like Zeus, Apollo or Athena and therefore doesn't follow "the rules."

In short, The Devil is the very antithesis of the cool, logical and controlled Zeus culture - it's instinct and passion... Eros to Aphrodite's Love. He's the deeply felt passion that rushes and churns like a raging river, our animal nature. He's at home in his body, and comfortable with his emotions and the body and emotions of others. One of the ancient pre-patriarchal gods was the Stag God, the wild heart of nature that beats and bleeds, but also loves and nourishes those who rely on his flesh for survival. The Devil is really the ancient matriarchal Horned God, the Triple Goddess' consort. He's the embodiment of the primitive masculine, the very part of us that we've cut off from ourselves. And until we reconnect with that suppressed part of ourselves our lives will be grey and colorless. But if we can reconnect with the Horned God - our Id, our inner Eros - life regains it's sensual pleasure.