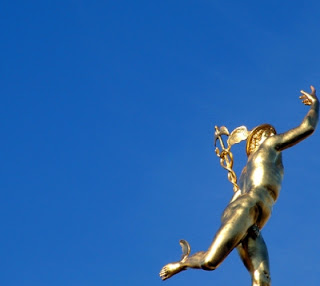 
Hermes in Myth: a synopsis


HERMES was the great Olympian God of animal husbandry, roads, travel, hospitality, heralds, diplomacy, trade, thievery, language, writing, persuasion, cunning wiles, athletic contests, gymnasiums, astronomy, and astrology. He was also the personal agent and herald of Zeus, the king of the gods. Hermes was depicted as either a handsome and athletic, beardless youth, or as an older bearded man. His attributes included the herald's wand or kerykeion (Latin caduceus), winged boots, and sometimes a winged travelers cap and chlamys cloak.

* The theft of Apollon's cattle which he accomplished as a toddler in the crib;
* The transformation of the tell-tale Battos to stone;
* The slaying of Argos Panoptes, the hundred-eyed guardian of the nymph Io;
* The assisting of Perseus in the hero's quest to slay Medousa;
* The seduction of Khione on the same night as his brother Apollon;
* The assisting of Odysseus in his encounter with the witch Kirke.

A  favored son.  Emotionally distant and mentally active, well-traveled, into words, negotiations, and commerce, but avoided physical conflict.  No wife or consort.  Quick, mentally agile, wordsmith, crossed boundaries and shifted levels with ease, lucky, friendly, bachelor, united opposites, inventive, communicator of meaning, guide of souls, ability to think and act quickly (in order to achieve or deceive), rescuer of the child (saving what is innocent and vulnerable, or divine and sacred, by providing meaning for an otherwise terrible experience), problem solver (but seldom worried about right and wrong), messenger, trickster, wily, traveler between levels (integrated the realms of spirit, human life and soul), unplanned eloquence, spontaneous, acted on intuition, precocious, questioned the conventional rules of success, inventive generalist, charming, personal and experiential sexually, “Jack of all trades, master of none”, variety and newness may have overridden passion, the eternal adolescent living in the realm of possibilities, tended to rationalize.  Hermes introduced fluidity, motion, new beginnings -- and the confusion that almost inevitably precedes new beginnings.  A major way for Hermes to grow is through falling in love with a woman who thus becomes his Aphrodite.  She would become the challenge, someone he yearned for, and could not have immediately, who moved him, made him vulnerable and more sensual.

He is the essence of the element of Air, almost completely removed from the realm of emotion, and all that is associated with him must be perceived accordingly. He will act with almost total emotionlessness. It's not that he has no emotions, just that he suppress them and doesn't really see the value in having them. The heart is the center of compassion, but it is also the center of fear, and with his heart firmly under his heel, the Knight of Swords is almost totally fearless and never anticipates defeat. He thinks of himself as invincible, and though this is a fault it can also give him bursts of confidence that let him succeed where others fail. Since he never doubts himself or his ability, he is the perfect person to implement new ideas that others shy away from.

His impartiality is priceless when making hard choices, though you have to be careful not to act too hastily, or else the effort is wasted. His refusal to back down from fear makes him a pillar of strength.

The Fool is an essential part of the Tarot because he is the spark that sets everything else into motion, the divine breath that gives life and inspires the first step towards fulfillment and completion. Though the first step down a long path may often seem small in comparison to the journey, that first step is vital because without it there would be no journey at all. The Fool is the cause behind all effects, the power behind all manifestations and the seeds of the end sown in every beginning. Though everyone calls him a Fool, he does not pay them any attention, and he simply goes on his way. In these things he can find knowledge and enlightenment. He does not care what others think or say about him, because he knows that what he is doing is right for him.

His approach to life is a strange, unconventional one, because he does what is comfortable to him. The only approval he requires is his own, he will continue to live this way, despite what all others think of him. He has total faith in himself. (Perhaps he is not such a fool after all.) The Fool does not hide himself from the light, because he is the light - the wonderful light that shines out of every child before they see the world and are forced to build so many walls and barriers to protect themselves. The innocence of a child, sadly, is something rarely found outside of children, even though a lot of people could use it these days. With this innocence comes perfect trust, fearlessness in others, and total self-reliance. It allows you to see the world with new eyes and learn new things every day of your life.

Journeys always imply a degree of risk, and hence the Fool is pictured walking toward the edge of a high cliff. With any new experience there is always the risk of failure and the certainty of change; it is the degree of change, and how that change will appear, that are undeterminable. But the Fool has no qualms about taking chances, so why should you? It is through the first steps that we learn how to walk, and it is through changes that we learn how to live our lives in harmony and peace. So jump head first into the abyss of the unknown, and know that even if you eventually fall to the ground, for a while you will soar.