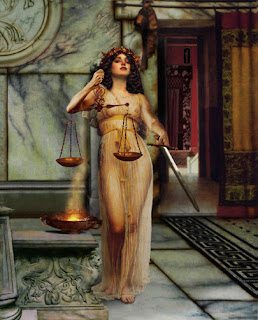 
Hecate in myth: a synopsis

HEKATE (or Hecate) was the goddess of magic, witchcraft, the night, moon, ghosts and necromancy. She was the only child of the Titans Perses and Asteria from whom she received her power over heaven, earth, and sea.

Hekate assisted Demeter in her search for Persephone, guiding her through the night with flaming torches. After their reunion she became Persephone's minister and companion in Hades.

Two metamorphosis myths describe the origins of her animal familiars: the black she-dog and the polecat (a mustelid house pet kept to hunt vermin). The bitch was originally the Trojan Queen Hekabe, who leapt into the sea after the fall of Troy and was transformed by the goddess into her familiar. The polecat was originally the witch Gale who was transformed into the beast to punish her for her incontinence. Other say it was Galinthias, the nurse of Alkmene, transformed by the angry Eileithyia, but received by Hecate as her animal.

Hecate was usually depicted in Greek vase painting as a woman holding twin torches. Sometimes she was dressed in a knee-length maiden's skirt and hunting boots, much like Artemis. In statuary Hecate was often depicted in triple form as a goddess of crossroads.

Hecate was identified with a number of other goddesses, including Artemis and Selene (Moon).

The Hecate archetype is my own discovery but she shares a lot with Artemis, with whom she's been lumped up until now. When I draw on others' observations on the archetypes, I'm going to retain the parts that apply to Hecate (or vice versa - in the posts on Artemis, I'll remove parts that don't belong to Artemis.)

Another of the virgin goddesses. Hecate was independent, nonrelational, untouched by the heat of emotion or passion, not moved by love, sexuality, or infatuation, one-in-herself, belonging to no man, with an active, focused consciousness and little apparent need to become vulnerable (to give and receive love and comfort and support growth in others).

Hecate is capable of feeling whole without a man, seeking her own goals on terrain of her own choosing, the ability to concentrate intensely on whatever was important to her and to be undistracted (either by the needs of others or by competition from others), competent, capable of achievement, concerned for victimized and powerless women, “moonlight vision,” felt strongly about her causes and principles, interests of no or limited commercial value, individualist, could be very vengeful, needed to develop  “the Far-Seeing Hecate.” Outrage at wrongs done and the strength to express a point of view are positive characteristics of Hecate.


The Queen of Swords is another of those cards in which the active and the receptive are sometimes in conflict, and sometimes they complement each other. She never shows her emotional side, but her judgement can sometimes be swayed by her heart, and because of this she's tends not to be a good confidante or judge. On the other hand, she's renowned for her perception and insight - the intuitive quality of the Water element and the mental clarity of the Swords are behind this potent combination. This keen vision allows the Queen of Swords to see straight to the heart of any situation, past the illusions that may deceive others, but not clear-sighted Hecate. She always sees both sides of every argument and those who try to deceive her will quickly taste her cold steel. The negative side of the Queen of Swords stems in part from her honesty and desire for the truth. Once she has a view of a bad situation she lets everyone involved know about it, and heaven help anyone who disagrees! Her mind is as sharp as a razor and, when it is not occupied slicing away lies, it will start to cut those she perceives as stupid, blind or lazy thinkers. She generally has few friends and tends to uses her dry and vicious humor to express her bitterness and dissatisfaction with the failures of the world.

Her ability to perceive the truth is valuable in untangling complex issues, or cutting through deceit. Tapping the power of the Queen of Swords will help you see what is hidden. Her wisdom and ability to be stoic in the face of suffering come from seeing painful experiences as opportunities to learn - developing your own ability to do the same will go far in reducing your suffering, and also the likelihood of repeating your mistakes. She learns a little from everything she does and from everyone she meets, and everyone who talks with her goes away a little wiser - whether they realize it or not!


The High Priestess is the manifestation of the unconscious and the effects of the mysterious in our everyday world. She is, above all else, the base of potential that is the source of the Magician's power. She is the unlimited potential that allows him to transform and create whatever his Will desires; instead of integrating opposites, the Priestess keeps them separate and keeps them in balance nonetheless. She herself is the scales – without this balance there can be no power. The second symbolic motif found in almost all instances of the High Priestess are symbols of the unconscious mind: the "twin pillars" symbology also depict a veil strung between those pillars; the High Priestess stands between us and that veil as a moderator. Behind the veil lies the powers of the unconscious, which we cannot start to understand but which, through her, we can learn to control. She is the gateway to realms that we may never fully comprehend or master.

While the Magician focuses his powers outward, to achieve a meaningful effect on the world, the High Priestess shows us that we can also use these powers on an inner level, to enrich and transform ourselves and our world. She is often a sign of the Shadow, the repressed aspects of yourself or society. If you accept the Shadow within you, its powers will be open to you if you wish to use them.

The Hecate archetype: a deeper look
Hecate in myth
Musings on Hecate