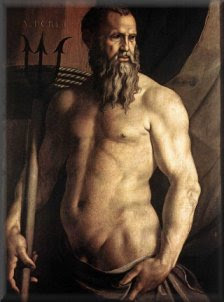 
Poseidon in Myth: a synopsis


POSEIDON was the great Olympian god of the sea, rivers, flood and drought, earthquakes, and horses.
He was depicted as a mature man of sturdy build with a dark beard, and holding a trident.

■The War of the Titanes where he fought beside Zeus and Hades to imprison the old gods in Tartaros;
■The division of the cosmos amongst the sons of Kronos in which he received dominion over the sea;
■The burying of Polybotes beneath the island of Kos in the giant war;
■The sending of a sea-monster to punish the Trojans for refusing to pay him for building their walls;
■The seduction of women such as Tyro, Amymone, Aithra and the Gorgon Medousa;
■His contest with Athena for dominion of Athens in which he produced the first horse;
■The persecution of Odysseus for the blinding of his son the Kyklops Polyphemos.

Brother to Zeus, but second rated.  His symbols were the oceans and horses, both symbols of the unconscious, the sea’s powerful moods: turbulent, indiscriminate, tremendous destructive force, flood-bringer and earth-shaker, “the undersea is the realm of repressed personal feelings and instincts, and the emotional realm we humans share collectively.”  The patriarchal culture allowed fathers as lord and master of their household to unleash fury there.  They were trained, in a world ruled by Zeus, to devaluate and submerge their feelings and instincts.


Each archetype has two corresponding Tarot cards: one from the Minor Arcana, which shows the archetype at it's healthiest - it's the way we can manifest their power and energy. The corresponding card from the Major Arcana, on the other hand, is the divine gift of the spiritual realm that they're seeking to manifest through us.

The King of Cups is an ambivalent figure: such a powerful male form seems almost out of place amidst the element of Water. This is why the King of Cups is often seen as a card of contradictions. He represents someone who is calm on the surface, yet passionate and volatile underneath. He shows a situation that is not entirely what is appears to be at first glance. Under his facetious exterior the King of Cups hides ulterior motives. The King of Cups appears as a wise advisor and a noble healer. He listens to the suggestions of others, even when they are in conflict with his own carefully formed opinions. He never judges, never blames others for their faults, and is always a sympathetic supporter. In return, others always gather around to hear what he has to say because his wisdom speaks directly to the heart. He is a natural diplomat, a romantic to the core and a stimulating partner, whether in conversation, friendship or a sexual relationship. He rarely lacks confidence, and in those rare cases when he does, nobody realizes it.

In fact, the King of Cups is almost always hiding something. He enjoys the quiet power he holds over others, and his personal agenda is as well-crafted as his speeches. He can be a seducer who thrives on the company of women, and he is often selfish and unfaithful. He also often lacks awareness of his true self and his own feelings. All of this comes about as a direct result of the battle between his fiery soul and his watery heart. The two opposing influences pull him in totally different directions, and often he does not know which to follow. As you might expect of such a combination, he is often insecure and indecisive, letting others decide for him. His gift is the ability to employ peace and tolerance to solve your problems. Use diplomacy rather than force, and accept different points of view. Do not blame others for their failures, but help them to see how they can succeed again.

The Chariot is a card of emotional control; the power of the mind to shape the desires of the heart and direct them to meaningful expression. This is not the emotional control of the Emperor, who totally supresses all of his emotions in favor of logic and reason. The man driving the Chariot knows that his emotions are not to be swept under the rug, but trained and used to his greater good. The triumph over both positive and negative emotions is often shown by two horses or sphinxes of different colors pulling the Chariot. Though on their own they would run wild and untamed, going in whichever direction they chose to go, here they move only forward. So they still have some power, but this power has now been directed and focused by the man holding the reins. The chariot cannot move without horses to pull it, just as we cannot function without our emotions to drive us. But without the control of the chariot, the horses would run free, just as our emotions can run wild when unchecked and uncontrolled. Balance is needed. Only through the mastery of yourself can you ever hope to achieve mastery over others and your environment. The wisdom and the glory gained through conquering one's enemies is nothing compared to the self-esteem you build through defeating your fear. Inner enemies are often tougher to defeat than outer ones, and thus teach you much more.

Through the application of emotional force we can learn to achieve our goals and desires much more quickly. For someone like the man on the Chariot, who is in total control of his will and his emotions, almost anything is within his grasp. Once you have reached that stage, anything is possible! Once you have transcended your fears you start transcending your restrictions until nothing can hold you back from the success you deserve. Great success and achievements will come to you if you master your passions and believe in the power of your will. Do not let anything distract or sway you from your goals, and proceed with the straight flight of an arrow. Nothing is beyond your ability if you believe in your own power.