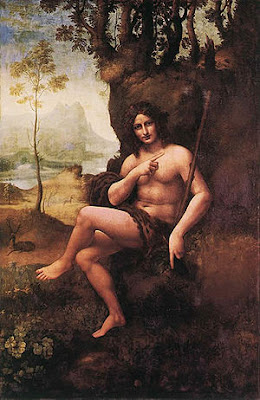 
Dionysus in Myth: a synopsis


DIONYSOS (or Dionysus) was the great Olympian god of wine, vegetation, pleasure and festivity. He was depicted as either an older bearded god or a pretty effeminate, long-haired youth. His attributes included the thyrsos (a pine-cone tipped staff), drinking cup, leopard and fruiting vine. He was usually accompanied by a troop of Satyrs and Mainades (female devotees or nymphs).

■His birth from the thigh of Zeus and his fostering by Ino, Seilenos and the Nysiades;
■His flight from Lykourgos who drove the young god and his followers into the sea;
■The dismemberment of Pentheus who denied the god's divinity and attempted to drive him from Thebes;
■The instruction of Ikarios in winemaking;
■The metamorphosis of the Tyrrhenian pirates into dolphins when they attempted to kidnap him;
■His love for Ariadne who he found abandoned by Theseus on the island of Naxos and wed;
■His journey to the underworld to recover his mother or wife;
■His campaign against the Indians.

Ambivalent.  He was [is] nurtured, mothered and fathered by Zeus.  Preferred to be with women and often came to their rescue.  Women liked his influence, while men reacted strongly with ambivalent feelings.

Dionysus was close to nature and women, familiar with the mystical realm and feminine world, often an unwelcome and disturbing element, a cause of conflict and madness, “the god of ecstasy and terror, of wildness and the most blessed deliverance”, mystic or murderer, divine child (specialness of person or destiny), actively repressed in men, regularity and constancy were foreign, shaman, psychological androgynous, capable of major emotional shifts precipitated by minimal events, focused on the moment, dancing and lovemaking were especially important, intense, spontaneous, sought full sensual experience (all five senses), tantric yoga advocate, individualistic (not a team player), non-competitive, wildly promiscuous or celibate, erotic nature easily evoked, impersonal in lovemaking, sex experience more important than conquest, anorexic?, needed to leave behind the divine child image and become the hero.  Rescued his mother from Hades.

In Greek mythology Dionysus was the only god who rescued and restored (instead of dominating or raping) women, who represent diminished earlier goddesses, and whose people and worship had been conquered.  “By ‘old boy’ standards, the Dionysus man is likely to be either too feminine, too mystic, too counter-culture, too threatening, or too attractive and too fascinating.”

Unlike two of the Knights of Wands and Swords, the Knight of Cups is not dashing across the land with the wind blowing through his hair. His horse moves forward, but slowly, giving an impression of calmness and peace. Indeed, the Knight of Cups is the most feminine of his group of four, though that does not mean by any definition that he is any less of a Knight. He is in touch with his intuition and emotions, and he uses them for his own good during his quests of romance and seduction. The Knight of Cups is a dreamer, one who is prone to wild ideas and flights of fancy. His wild imagination puts a bit of a spark in any relationship he's involved in, and he always seems to be in a relationship of some kind because he's a born romantic - and a hopeless flirt. Beneath his calm exterior he is a man of intense passion, though he generally diverts this passion towards reaching his goals and making his dreams come true. His is an idealistic view of life that is scorned by the active and despised by the realist. Inversely, he has no tolerance for people who cannot believe in their dreams.

Knight of Cups can teach you to follow your dreams, but do not let them become an obsession. Develop your imagination, and let it guide you, but never let it rule you or lead you to ruin. Show love but do not go overboard and become committed to something you cannot handle. Make sure you are in control of your life, and your dreams.

Spiritual rebirth after the end of the world. This is another card of transition, like Death and the Tower, but its energy is neither violent nor catastrophic despite the fact that its power is far greater. This is the energy of creation without destruction, impossible on the material plane but certainly possible in the world of the spirit. There is rebirth not through discarding negativity, but through integration of all parts of the self. The spirit is cleansed and restored without loss or addition. It remains the same, but different. The union of the material and spiritual world into a single unit of manifestation, and the union or reconciliation of the different parts of yourself. The three human figures found on most versions of the card allude to this. The man represents the renewal of the conscious mind, the woman is the rebirth of the subconscious, and the child is the boy from the Sun, the eternal child in us all. United into one voice, they praise the angel that appears in the sky. After the non-destructive cleansing and restoration of Judgment, matter, mind and spirit are one - now and forever.

Judgment is also a card of cleansing, representing a time where your slate is wiped clean and you can start over, with all your debts taken care of and with nothing to worry about. This may seem too good to be true, and for a lot of people it is, because they ruin their new chance with thoughts of the mistakes they made in the past. Judgment teaches that while you must be aware of the past and the lessons you have learned, you must not degrade yourself because of mistakes - mistakes are just part of learning! Put the past behind you and look to the future, ready to begin again. Now is time for a definite step, so don't let the shadows of the past hold you back.