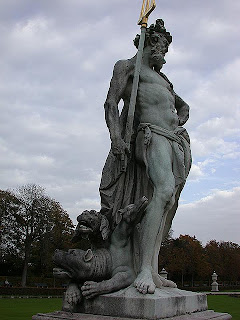 This series is going to be both a collection of information about a particular archetype as well as an ongoing exploration of the archetype: it's mythological history, relations with other archetypes, my own musings, whatever comes up.


Hades in Myth: a synopsis


Hades was the King of the Underworld, the god of death and the dead. He presided over funeral rites and defended the right of the dead to due burial. Hades was also the god of the hidden wealth of the earth, from the fertile soil with nourished the seed-grain, to the mined wealth of gold, silver and other metals.

Hades was devoured by Kronos as soon as he was born, along with four of his siblings. Zeus later caused the Titan to disgorge them, and together they drove the Titan gods from heaven and locked them away in the pit of Tartaros. When the three victorious brothers then drew lots for the division of the cosmos, Hades received the third portion, the dark dismal realm of the underworld, as his domain.

Hades desired a bride and petitioned his brother Zeus to grant him one of his daughters. The god offered him Persephone, the daughter of Demeter. However, knowing that the goddess would resist the marriage, he assented to the forceful abduction of the girl. When Demeter learned of this, she was furious and caused a great dearth to fall upon the earth until her daughter was returned. Zeus was forced to concede lest mankind perish, and the girl was fetched forth from the underworld. However, since she had tasted of the pomegranate seed, she was forced to return to him for a portion of each year.

Hades was depicted as a dark-bearded, regal god. He was depicted as either Aidoneus, enthroned in the underworld, holding a bird-tipped sceptre, or as Plouton, the giver of wealth, pouring fertility from a cornucopia. The Romans named him Dis, or Pluto, the Latin form of his Greek title Plouton, "the Lord of Riches."

God of the Underworld.  He is grim, inexorable, sternly just, irrevocable in his decrees; he was not evil in himself, not an enemy of mankind, nor a tempter of evil.  His realm was the unconscious.  He was the god of riches, the cornucopia or horn of plenty, the unseen presence.  Human recluse, unaware of what is happening in the world, without a persona, invisible, without position or wealth, preferred the subjectivity and richness of his interior world, capable of “doing nothing”, a source of creativity, good counselor, Dr. Jekyll and Mr. Hyde (Zeus and Hades), introverted, weak will or simply didn’t get-into-an-uproar, autistic, secretive, “different”, but with an inner orientation which conveyed strength and thus did not make him a victim, cut off from the realm of emotions, emotionally illiterate, dreamer (“Fantasies and active imagination are voluntary descents to be entered and left at will.”).  Both Zeus and Poseidon forced women sexually repeatedly, yet it was Hades who got the bad reputation; the others got away with it.

Usually everything the King of Pentacles touches turns to gold. He is a pillar of stability, with experience to share with everybody. This is the logical conclusion of all the positive ideals of the Pentacles suit: through diligence, responsibility and attention to detail we can and will become like the King of Pentacles. He is usually rich materially and he encourages you to live your life like he would. No one has a stronger character than the King of Pentacles. His word is as good as gold, and certainly just as valuable. He's similar to the Knight in that whatever he says he will do, will get done. But where the Knight takes on responsibility for the sake of responsibility, the King is in it for profit. He's the master of the material world. This could be seen as a fault, and it can certainly become so if he lets it get too far out of hand, but this rarely happens. He has too much experience and intelligence to be swept away by the allure of money; he prefers the security and peace of mind that it brings him. A lot of people see the King of Pentacles as dull and unimaginative, but this is probably because he simply prefers old ways of thinking and acting. This is not to say that he refuses to learn new things; in fact, he likes learning and has a wide variety of skills to call upon. But the old methods usually work best for a King of Pentacles and so he sticks with them. He is relied upon because of his devotion to duty and his trustworthiness. It's rare to see a King of Pentacles get angry, because they have a steady temperament and a very long fuse. But he is unforgiving to those who violate his trust, and for those people he has absolutely no mercy.

Whenever you need the skills to manage your affairs competently and efficiently, you can call upon the King of Pentacles. Take up all the vast challenges of the material world, and know that you can conquer them all if you work hard. Give generously of your time and resources, because by giving you often receive more. Let the King inspire you to success so you can inspire others in turn.


When questions about the nature of existence and the purpose of life start eating away at your mind, answers will not be found in the physical world. They can only be found inside of you. You have risen above your desires and emotions because they will no longer help you on your journey. Now you must become like the Hermit, who seeks the answers alone. Only the whispers of his Inner Voice, and the light of his lamp, will guide him now. Eventually even that lamp shall be cast away, because it is artificial and will not help the Hermit forever. His own inner light must learn to shine in the absence of the light of others. For true wisdom to emerge, there can be no distractions. Any preoccupations of the world, no matter how small or inconsequential they may seem, will be heard as shouts that drown out the still voice within. It is not enough to rid yourself of inner turmoil, though that is a step in the right direction. The next step is to eliminate outer turmoil, through isolation and withdrawal from the world. This is the path of the Hermit, who slips into darkness in order to have the light revealed to him when he is ready. Like the Fool, he is once again alone, separated from all others. But this time it not only by choice, but by necessity.

Once he has learned the lessons and seen his true wisdom, the Hermit will often pick up his lamp and return to the real world, in order to help others see their own potential as well. But the Hermit is not a teacher; he will not lecture his students and tell them all about his experiences of solitude and isolation. They must experience it themselves, for wisdom earned simply by listening to another person is not really wisdom at all. True wisdom and true enlightenment always come from within. A teacher may tell the student how he found wisdom, but the student must go and find it for himself. Wisdom is not a gift presented to you on a platter. It is a gift you give yourself.

His gift is a call to learn more about yourself and the nature of your existence. It will be a powerful change requiring much effort and commitment. If you are ever in doubt, know that all the wisdom you will need is already inside you, waiting to emerge. This light will not come unless sought out, but when it does, you will see that you had the answers all along.