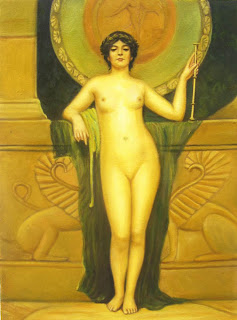 The Hecate archetype is my own discovery but she shares a lot with Artemis, with whom she's been lumped up until now. The two are very similar, and often conflated; both are moon goddesses, both are virginal and self-directed. Both have links to Apollo (Artemis as his twin and Hecate's name is a male version of Hacatos, one of Apollo's epithets, meaning "will"). Each operates as the dark mirror image of the sun god - where Artemis is is the ruler of wild places, and pure physicality to Apollo's refined civilization, Hecate is the goddess of the deep, secret wisdom of the night to his daylight intellectualism. Another thread connecting Artemis and Hecate are their mothers - the two, Leto and Asteria, were sisters, and their mother, and Artemis and Hecate's grandmother, was Phoebe, the Titan goddess of the moon.

The difference between Artemis and Hecate is that, while Artemis is the wild Goddess of animals and nature, full of passion and energy, Hecate is ancient, secret wisdom and the sword of vengeance. In one myth Hecate is a mortal priestess associated with Iphigeneia. She scorns and insults Artemis, who in retribution eventually brings about the her suicide. Artemis then adorns the dead body with jewelry and commands the spirit to rise and become her Hecate, who subsequently performs a role similar to Nemesis as an avenging spirit, but solely for injured women. Perhaps because she was an ancient Great Goddess, demoted to second class she represents the desire for justice of women under patriarchy? She's commonly associated with witches - her ability to see past the confusion on the surface to the truth of the matter. Hecate is often represented as a giant woman, holding a torch and a sword, by which she illuminates what is in the dark. She was the only Titan who fought on the side of Zeus, and as such, the only one not banished to the underworld.

Although Hecate was originally a strong, beautiful woman she became associated with an ugly hag – Hecate truths frighten most people and they turn away from her. Hecate is often confused with Persephone – both threaten society’s Daylight order (represented by Apollo). Hecate speaks the truths that others don’t want to see – no idea is off limits to Hecate. While Persephone explores them the depths of the Earth, Hecate shines a laser like light (and maybe sends down a seeing eye robot). Stability is important for society – without it we have to place to stand on from which to push ahead. Hecate is pushing ahead – she fishes the deeps to bring it’s treasures for humanity. Her new ideas may shake society to it’s foundation – people often hate and reject her and her ideas – but time usually proves her right.


There’s a warning for Hecate, too – she can be wrong. But Hecate has the ability to be dispassionate and finds it easy to discard anything which has been proven wrong. It's common to hear scientists and other thinkers say they're glad when their experiment has been proven wrong or, upon completion, they find it's pointing to even more questions. It's those kinds of results that lead to more knowledge. Where your average person would get frustrated, or emotionally attached or feel that their ego was at stake, a Hecate is excited, the way an Artemis would be upon meeting a competitor who might defeat her. It's the pleasure of pure knowledge, for it's own sake, that thrills Hecate... That, and its pursuit.

Hecate's gifts are the fearless intellect – the ability to stare into the abyss with boldness and curiosity rather than fear and shrinking away from it. Don’t be afraid to be wrong and you will discover truths that no one else has ever seen. But Hecate doesn’t do this for herself – she does it for humanity.

Jean Shinoda Bolen divides goddeses into virginal (independent) and vulnerable (dependent on relationships) and alchemical (both relational and independent.) The three virginal goddesses are Athena, Artemis and Hestia. The three vulnerable goddesses are Demeter, Hera and Persephone. Aphrodite is the lone alchemical goddess. I think it would be more useful to divide them up into relational or independent. Relational goddesses turn to outwards to others, and mainly see themselves through their relationships: Demeter the Mother, Hera the Wife, Persephone the Daughter and Aphrodite the Lover. The independent goddesses are fundamentally independent of others and mainly see themselves in relation to their work: Artemis with Nature, Hestia her Home, Hecate her Studies and Athena her Success. However, Aphrodite and Athena are the two goddesses that can flip being relational/independent; although Aphrodite lives to love, she's independent at heart and never stays with one lover. And although Athena lives out in the world, mixing it up in the battle of success, inside she's always Daddy's Little Girl, seeking his approval.

One other thing I'm pondering are the two triads. There's a triad that's fundamentally about relating to men; Demeter the Mother, Aphrodite as Lover and Hera the Wife. Then there's Persephone as the Triple Goddess, who relates not to others but solely to herself; Kore as hopeful Maiden, Persephone as powerful Woman and Hecate as wise Crone. And this is why the mature Persephone is both childless and a powerful Queen in her own right, despite being married.

Goddess Power writes about how Hecate, who appears to be an aspect of Persephone (Maiden/Mother/Crone - Persephone/Demeter/Hecate, or Kore/Persephone/Hecate) - did nothing to help Persephone when she was abducted by Hades, nor did she say anything when Demeter looked for her. She describes Hecate as follows:

Witch & killer - the one who ignored Persephone’s cries -- unconscious, repressed rage which is projected onto others


This just seems wrong to me. Granted, Persephone can be self indulgent, whiny and narcissistic, but I don't think this adequately explains what's going on here. Hecate is the Witch goddess, with Moon wisdom, and possibly related to the Fates. She more than anyone knows that Persephone needs to go down into the underworld... she needs to start taking charge of things rather waiting for Mom or someone else to do everything for her, or to blame others for not taking care of her. In short, she needs to grow up. Hecate kept quiet because she knew if Demeter convinced Zeus to get Persephone away from Hades, and out of the underworld, she'd never do that.

Also, I'm not 100% sure, but I really think Hecate might be an aspect of Persephone, rather than a separate archetype. And as such, she probably went through this whole experience herself, so she knows excactly what Persephone needs. Hecate looks for Persephone with Demeter when she's first abducted, and, after Persephone becomes Queen of the Underworld, she stays in Hades to become her closest advisor. She is one of only two beings who can come and go from Hades at will - perhaps a metaphor that once a Persephone descends and completes integration, she is able to pass from the deep subconscious to the daylight realms of consciousness at will.

Some more Hecate musings - it's still early days so I'm not 100% sure if Hecate is a separate archetype or something that only manifests in conjunction with Persephone, with whom she's closely tied. In myth, Hecate is either is one of the few people who see Persephone's abduction by Hades... or she's the one who aids Demeter in searching the world for her. When Persephone becomes Queen of the Underworld, Hecate is her counsellor... and she's one of a very few, either god or mortal, who can come and go to the Underworld as they please (Hermes is the other.) Also, Hecate is the only archetype who doesn't have an archetypal partner that's their romantic ideal.

I don't think the Hecate archetype is the matured Persephone, as I haven't matured yet and I'm a Persephone. As I go through the process of maturing, it feels as if a mature Persephone is different from Hecate. Which makes sense, as Hecate is her counsellor... and in my meditations with my various archetypes that's always been the role Hecate plays, regardless of whether I identify with her or with Persephone. Or maybe it's that Hecate can herself be immature when Persephone's immature but, as Persephone matures, the two integrate and become a whole which is greater than either alone?

There's a definite link between Hecate and Persephone - or Hecate and Persephone's two sides as Maiden and as Queen, as described by Persephone's two Major Arcana cards; The Star for the maiden Persephone (or Kore) and Death for Persephone as the Queen of the Underworld. The three are sometimes considered the Triple Goddess of Maiden, Mother and Crone, and Hecate's asexuality is very crone-like. The two share realms (Hades), characteristics (triple natured-ness) and even signs and symbols (Cerebrus, the three headed dog of Hades.) Again, it's still early days but I'm getting more and more the feeling that Hecate and Persephone are deeply related. Which may be why Jean Shinoda Bolen and others never realized she existed - because maybe she can't exist separately from Persephone? One thing I've always felt is that Hecate might be an older, wiser Persephone from a past life - someone who's already gone through the Persephone experience and thus has gained the wisdom of a death transformation. The fact that Hecate's mother is Asteria, the Titan star goddess, suggests this might be the case (Persephone's Major Arcana card is The Star). Perhaps Hecate is what Persephone grows into - the High Priestess and Queen of Witches.