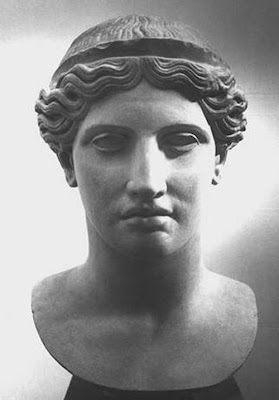 This series is going to be both a collection of information about a particular archetype as well as an ongoing exploration of the archetype: it's mythological history, relations with other archetypes, my own musings, whatever comes up.

Hera in Myth: a synopsis

HERA was the Olympian queen of the gods and the goddess of women and marriage. She was also a goddess of the sky and starry heavens. She was usually depicted as a beautiful woman wearing a crown and holding a royal, lotus-tipped staff. Sometimes she held a royal lion or had a cuckoo or hawk as her familiar.

Some of the more famous myths featuring the goddess include:

■Her marriage to Zeus and her earlier seduction by the god in the guise of a cuckoo bird;
■The birth of Hephaistos who she produced alone and cast from heaven because he was crippled;
■Her persecution of the consorts of Zeus, especially Leto, Semele and Alkmene;
■Her persecution of Herakles and Dionysos, the favourite bastard sons of Zeus;
■The punishment of Ixion, who was chained to a fiery wheel for attempting to violate the goddess;
■The assisting of the Argonauts in their quest for the golden fleece, their leader Jason being one of her favourites;
■The judgement of Paris, in which she competed against Aphrodite and Athene for the prize of the golden apple;
■The Trojan War, in which she assisted the Greeks.

One of the vulnerable goddesses.  She was [is] relationship-oriented (dependent upon a significant one), had a need for affiliation, tended to experience powerlessness and responded with rage and jealousy, accepting, diffuse awareness. Fundamentally incomplete without a marriage partner, Hera yearned to be a wife, stately, regal, a Nancy Reagan, beautiful, honored and humiliated, with the capacity to bond, loyal, faithful, enduring, committed, predisposed to displace blame from her mate (on whom she was emotionally dependent) onto others, vindictive (a mental sleight of hand which made her feel powerful rather than rejected), derived emotional security from a high-status male, work was secondary, placed minimal importance on female friends (husband’s primary friend), preferred a man who was emotionally dependent upon her, saw sex as a duty, could oppress other women, could be very destructive, and judgmental of other women (and really hated Aphrodite types!).  He style of “limiting herself to being a wife results in limiting her growth and ability to adapt, if death or divorce brings her wife role to an end.”  She is only a half of a whole, fulfilling a culturally determined role.

She is almost universally pictured with a cat, and this feline companion represents Venus in both its creative and sinister aspects. Thus the Queen of Wands is someone who can use for fire energy for good or evil; almost a Swords notion. The person who takes after the Queen of Wands will know what they want in life, and they will go after it whenever they get the opportunity. Such a person cannot be swayed from their goals, no matter how strong the forces opposing them. She is independent but has a lot of friends - in fact, she is almost always the center of attention of a large group. Her charisma and enthusiasm tends to attract others to her. And that's not all people are attracted to - the Queen tends to be a very sexy and sensual woman, despite being by far the most masculine of the Queens. Such are the contradictions inherent in this fiery and ambitious woman! But there is that negativity factor talked about earlier left to consider. Her sutbbornness will often lead to her detriment as she pursues an ambition for too long and burns herself out in the process. Even the Queen of Wands is not invincible, though from her general outlook on life she might seem to be, and she definitely believes she is. She always has to be on the move, and she will not tolerate anything that makes her stay somewhere for longer than she wants to. Often she takes others' problems into her own hands to see them solved more quickly, and in fragile situations this can cause more problems than it solves. In general, she would make a great friend, but a very dangerous enemy.

Her constancy and dedication will surely be an aid if you have a creative vision that needs to be carried out, and her innate magnetism will draw to you all the allies and friends that you need. If people call on your strength then be ready to give it; if people ask your guidance, do not hesitate to speak your mind. Engage tough issues with all your might, and do not relent until the day is won.

After every obstacle has been faced and surmounted, after every path has been travelled and charted, there remains only the last step to the next level of existence - the World, the final gateway: the union with the Divine. This card, as befits its nature, has the same basic symbolism in almost all of its myriad version. There are the four cherubs embodying their domains; The bull for matter, the lion for energy, the eagle for time and the man for space. Together they represent the unified creation and control of all things in the Universe. Another common motif is the dancer in the centre, with her twin wands. The wand is that of the Magician, but it has now multiplied, and the need to ground its magical power has vanished because it has become one with its source of power. Positive and negative can be seen as two parts of the same whole. One is many. Many are one. All the lessons learned have been put to use. All the tasks accomplished have born fruit and brought prosperity. Every cause has had its effects and all of the diverse threads of effects have been woven into a tapestry of your life as you have lived it.

Happiness, and the peak of ecstasy. The present is now. The future is now. Eternity is now.