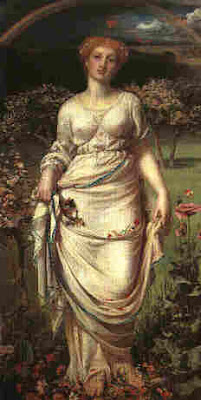 
Hestia in Myth: a synopsis

In myth Hestia was the first born child of Kronos and Rhea who was swallowed by her father at birth. Zeus later forced the old Titan to disgorge Hestia and her siblings. As the first to be swallowed she was also the last to be disgorged, and so was named as both the eldest and youngest of the six Kronides. When the gods Apollo and Poseidon sought for her hand in marriage, Hestia refused and asked Zeus to let her remain an eternal virgin. He agreed and she took her place at his royal hearth.

Hestia was depicted in Athenian vase painting as a modestly veiled woman sometimes holding a flowered branch (of a chaste tree ?). In classical sculpture she was also veiled, with a kettle as her attribute.

Another virgin goddess, like Artemis and Athena, but having an adaptation mode of withdrawing from men, becoming anonymous in appearance and alone.  Hestia focused, instead, on the inner subjective experience, totally absorbed when she meditated, sought quiet tranquillity, solitude, found keeping house a meaningful activity (kairos time -- participating in time) or even a form of worship, above and out of intrigues and rivalries, avoided being caught up in the passions of the moment, never elated or devastated, wise, detached and connected, centered, quiet, unobtrusive, warm, peaceful, self-sufficient, the original “old soul”, lacked ambition and drive, did not value power or recognition, viewed sex as a nice, warm experience, nonorgasmic, “still waters run deep,” rejected the intellectual and emotional forces that might pull her away from her center.

The Page of Pentacles is the most responsible of the Pages, a trait which is shared by all the Pentacles court cards because of their Earth nature. A Page of Pentacles is generally young of body but old of mind. She is a diligent worker and an efficient manager, who uses common sense more than intuition and does things by the book rather than taking risks. Despite this, however, she is always open to new ideas and isn't as rigidly dogmatic as the rest of the Pentacles court cards. She sees the opportunities that are inherent in every situation and she finds the best ways to exploit them based on the resources at her disposal. The Page of Pentacles takes great pleasure in the world, and she will try to preserve its beauty just as she will preserve the old ways of thinking and doing things.

The Page of Pentacles within each of us is a good energy to call upon when we must manage a team or handle a big responsibility. Gather your resources and use them wisely, because only through such wisdom can success be achieved. When this energy is strong within you, you will often develop a passion for learning and absorbing new ideas. Apply knowledge with enthusiasm, think practically in all situations, and you cannot fail.

The process of reconstruction and harmonization is shown by the card called Temperance, to modify or strengthen by adding a new component to an existing substance or mixture. All applications of Temperance share the common theme of moderation and balance, culminating in the creation of a centered and well-rounded being. The red-on-white symbology first shown in the Magician also appears on this card - the temperance of desire (red) with purity (white) is one of the most fundamental manifestations of this card, as is the reverse (purity with desire). The angel wears a white robe and has red wings. Purity of heart and mind gives you a solid base to fall back upon, but only through the desire for personal growth can you ever develop. The angel's white robes give her her basic form, but only through the control of her red wings comes her ability to fly.

Before you can achieve harmony in your relationships with the people around you, you must make peace with yourself. Inner imbalances can often manifest in the physical world if they are not attended to, whether or not the imbalance is a negative one. Balance is best achieved through turning to the Inner Voice for guidance.