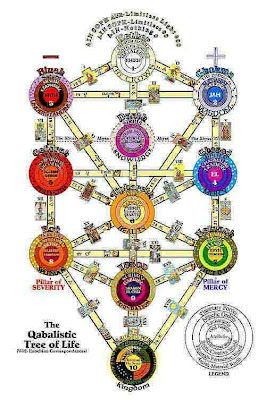 So I'm trying to get a deep understanding of the cards. Last night I laid out each suit, from 1 to 10, in parallel rows - I was trying to get a sense for what each number means. I had a basic idea of each suit from my work with the archetypes and their minor arcana correspondences but I really wanted to grasp the journey that is being described through the suits.

The Tarot is largely based on the Kabbalah, the Jewish mystical system of "hidden truth" and it is fundamentally a journey through the Tree of Life. It's both the way the universe comes into being and also also every person's journey to the divine. It describes the journey from Nothing, bursting into Multiplicity, then back to Union with the Divine.

The Journey Through the Tree of Life

Each element travels it's own path, and has it's own lessons to teach. The suits of generation (Pentacles and Cups) result in abundance, or love. The suits of struggle (Wands and Swords) generally have more painful results - "those who live by the sword, die by the sword." When you spend your whole life seeking to create abundance or build relationships, that's what you get but if you seek to defeat others, the eventual result will be your own defeat - we always reap what we sow. By understanding the meanings of the suits and of each numerical stage we can have a deep understanding of each card. The entire journey seems like it would be useful for meditating on the soul's path in our lives.

What strikes me as I read over the journey through the 10 sephiroth is that each stage is necessary, even the painful ones. The point is not to avoid certain stages but to fully grasp and experience each sephiroth. The point of the spiritual quest is not to avoid suffering, let alone deny it. It's to fully experience it... and every other stage of life. Why else would we have chosen a physical life? Life is good, and it is good we are alive. Even if not everything in life is fun all beings that have life want to live, want to experience life.

A random political realization: The reason so many religions, and so many people, are looking for a "better" life beyond our world is because life is so shitty for so many of us. Probably the single best thing we could do as a species for spiritual growth would be to make the world a better place for all humans, so that we could live, and grow, the way we're meant to.

One thing I'm pondering is the possibility that there are three triads of goddesses. There's a triad that's concerned with work; Artemis with nature, Hestia her home, Athena her success. There's a triad that's fundamentally about relating to men; Demeter the Mother, Aphrodite as Lover and Hera the Wife. Then there's Persephone as the Triple Goddess, who relates not to others but solely to herself; Kore as hopeful Maiden, Persephone as powerful Woman and Hecate as wise Crone. And this is why the mature Persephone is both childless and a powerful Queen in her own right, despite being married.

If this is the case, then the three triads could correspond with the nine lower sephiroth - the tenth would be the Great Goddess. Here's a possibility of how they correspond:
Or maybe each person has their own personal set up. Will have to think on this.

Email ThisBlogThis!Share to TwitterShare to FacebookShare to Pinterest
Labels: Tarot