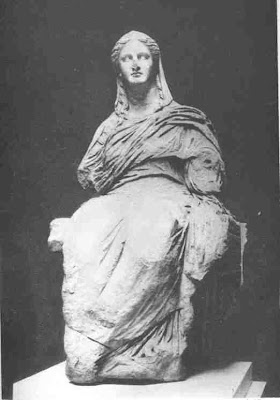 Learning about the archetypes has taught me a lot about why I'm so attracted to Demeter types, and they really like me, even though I'm pretty freaky and they're pretty conservative - we're drawn to each other, having warm relationships, and are always looking for each other.

At the same time, it explains my problems with them - even through I'm drawn to them, I'm also very solitary and don't need them... or anyone else. And the one thing Demeter's can't handle is not being needed! My grandmother, with whom I lived in high school, was a Demeter and the biggest, most upsetting incidents - I can't call them fights because it would just be me cluelessly doing  something and her getting incredibly upset - was because I'd inadvertently sent the message "I don't need you." Like when I started doing my own laundry in preparation for living on my own in college. This was HUGE TRAUMA for my poor Demeter grandmother, and my poor, self sufficient Artemis, and approval seeking Persephone got upset when Demeter got upset... It was an all around bad situation, let me tell you! And, until I read about Demeter and the Queen of Pentacles and The Empress, I really didn't get why she was so upset, but I get it now. It makes me want to go visit her and give her a hug.

Jean Shinoda Bolen divides goddeses into virginal (independent) and vulnerable (dependent on relationships) and alchemical (both relational and independent.) The three virginal goddesses are Athena, Artemis and Hestia. The three vulnerable goddesses are Demeter, Hera and Persephone. Aphrodite is the lone alchemical goddess. I think it would be more useful to divide them up into relational or independent. Relational goddesses turn to outwards to others, and mainly see themselves through their relationships: Demeter the Mother, Hera the Wife, Persephone the Daughter and Aphrodite the Lover. The independent goddesses are fundamentally independent of others and mainly see themselves in relation to their work: Artemis with Nature, Hestia her Home, Hecate her Studies and Athena her Success. However, Aphrodite and Athena are the two goddesses that can flip being relational/independent; although Aphrodite lives to love, she's independent at heart and never stays with one lover. And although Athena lives out in the world, mixing it up in the battle of success, inside she's always Daddy's Little Girl, seeking his approval.

No wonder I'm so attracted to motherly Demeter's! It's always puzzled me; I meet these women who are so different from me, usually extremely conventional and traditional, and yet I love them! And they love me back! It's because Persephone is always looking for Demeter and Demeter, in turn, is looking for her lost daughter - when we meet, we tend to feel an almost instant bond of affection. This explains a LOT.

By the same token, Demeter has to learn to let go... that in letting go when the time is right is the most nurturing thing she can do for her "children," whoever they might be.