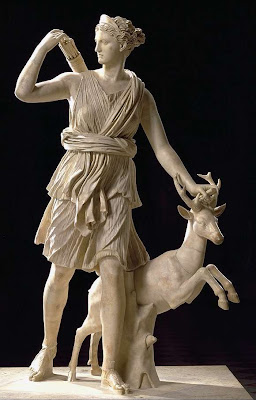 
Artemis in Myth: a synopsis


ARTEMIS was the great Olympian goddess of hunting, wilderness and wild animals. She was also a goddess of childbirth, and the protectress of the girl child up to the age of marriage. Her twin brother Apollon was similarly the protector of the boy child. Together the two gods were also bringers of sudden death and disease--Artemis targetted women and girls, and Apollon men and boys.

In ancient art Artemis was usually depicted as a girl dressed in a short knee-length chiton and equipped with a hunting bow and quiver of arrows.

Some of the best known myths featuring the goddess include:

■Her birth, immediately following which she assisted her mother in the birth of her twin brother Apollon;
■The Trojan War where she was beaten by Hera in an angry contest of the gods;
■The hunter Aktaion who encountered the goddess whilst she was bathing and was turned into a stag;
■The Aloadai giants who attempted to storm Olympos but were tricked by Artemis into killing each other;
■The sacrifice of Iphigeneia whom King Agamemnon offered to her for the passage of the Greek fleet to Troy;
■The giant Orion, a close companion of the goddess, who was slain by the goddess or her jealous brother;
■The Kalydonian boar sent by Artemis to ravage Kaldyon;
■The nymph Kallisto, a companion of Artemis, who was seduced by Zeus in the guise of the goddess.

Another of the virgin goddesses.  Artemis was independent, nonrelational, one-in-herself, belonging to no man, with an active, focused consciousness, with little apparent need to become vulnerable (to give and receive love and comfort and support growth in others).  Artemis’ adaptation mode had been to separate from men and their influence, and join other feminists.

Artemis is the personification of the independent feminine spirit, capable of feeling whole without a man, seeking her own goals on terrain of her own choosing, the ability to concentrate intensely on whatever was important to her, competent, capable of achievement, concerned for victimized and powerless women and young (including her mother), safe childbirth goddess, sister, back-to-nature, capable of at-oneness with herself, active rather than passive, felt strongly about her causes and principles, interests of no or limited commercial value, competitive, individualist, recreational sex advocate, where relationships were secondary, sexual intimacy as another dimension of friendship, “Wonder Woman”, a female bear (protecting girls on the threshold of being women), could be merciless, needed to develop compassion and empathy, and “the Far-Distant Artemis.”  While Artemis might rescue women and feminine values from the patriarchy, she could also require women to sacrifice and devalue what had traditionally been considered feminine (receptive, nurturing, related-to-others and willing to make sacrifices for the sake of others.)

Each archetype has two corresponding Tarot cards: one from the Minor Arcana, which shows the archetype at it's healthiest - it's the way we can manifest their power and energy. The corresponding card from the Major Arcana, on the other hand, is the divine gift of the spiritual realm that they're seeking to manifest through us.
Page of Wands


The Page of Wands has a passion for life, and is a free spirit, not weighed down by the burdens of the material world, coming and going as she pleases, usually bringing change along for the ride. Such a person often has a vivid and childlike imagination, though they may neither realize it is there or know how to develop it for creative purposes. As such her ambitions are high but not unattainable; she will challenge herself but she will probably not overstep her limits unless pushed to do so. As a Wands card, ethics are always high on her list of priorities. She accepts change because she is the agent of change, the catalyst and the creative visionary. She is also a faithful lover with almost unlimited passion and enthusiasm.

Her greatest power, in fact, is the power to deal with fears by facing them and seeing them for what they are. The light of her inner fire can expose the dark demons that you have been so afraid of, and show you that what you were running from was yourself all along. Once you see that your fears are nothing but parts of you, you can integrate them into yourself and grow stronger. Leave your fear behind and you'll be surprised how much freedom you'll win.
The Moon (XIII)


In ancient religions the Moon deity was often a Goddess with ties to female fertility, because there was a visible correlation between the cycle of the Moon and the female menstrual cycle. While this association is still valid, the Moon of the Tarot tends to deal with fertility of imagination rather than fertility of body. The crayfish shown regularly on Moon cards is a sign of the emerging subconscious and its influence over the conscious mind, and for a mind closed to the messages of its subconscious, there can be a lot of illusion and deceptions to face. You can no longer tell what is real and what is just a manifestation of your fears and desires. There is no sunlight to guide you, no distant landmark in the hills to direct your steps, no one to travel alongside. This is a journey that must be made alone, in darkness and without a map or a compass. You must learn to rely on your own inner light to lead you along the true path. Any hesitation, any doubt, and that light will be extinguished forever. But if you believe, your light will shine forever, as brightly as the sun that will inevitably rise once this night has passed.

This card can also show times when you are not sure of your destination, or even of the path you are travelling - but you travel nonetheless. It's quite possible that you have lost your way, and are stumbling around in the dark. If you wait until the sun rises again the path may have changed and the opportunity could have been lost. So what should you do? The Moon is a card of intuition and psychic forces, so let go of your conscious mental blocks and let your intuition guide you. Not only will the way forward be revealed, but in a lot of cases you will learn lessons about yourself that will be valuable in later journeys.
http://www.ata-tarot.com/resource/cards/index.html