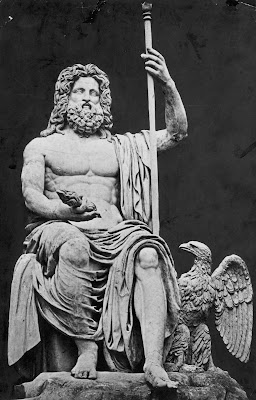 
Zeus in myth: a synopsis


ZEUS was the king of the gods, the god of sky and weather, law, order and fate. He was depicted as a regal man, mature with sturdy figure and dark beard. His usual attributes were a lightning bolt, royal sceptre and eagle.

■His birth and upbringing in the Diktaion cave, where he was nursed by Amaltheia and guarded by the shield-clashing Kouretes;
■The Titan War in which he overthrew the Titanes and imprisoned them in Tartaros;
■His battle with Typhoeus, a hundred headed, monstrous giant who attempted to capture heaven;
■The War of the Giants who attempted to storm Olympos but were slain by Zeus and the gods;
■The Great Deluge in which he flooded the earth to destroy mankind and begin the world anew;
■His conflict with Prometheus over the theft of benefactions for mankind;
■The punishment of Salmoneus, Tantalos and Ixion, men who offended the god with their impiety;
■The birth and life of Herakles, his favoured son, who he had transferred to Olympos at death;
■His extramarital affairs with women such as Leda, seduced in the form of a swan; Europa, as a bull; Danae, as a golden shower; Kallisto, as Artemis; and Antiope as a satyr;
■The Trojan War which he orchestrated from start to end, including the casting of the golden apple of discord.


As chief of the gods, Zeus was required to lose touch with the earth in order to gain an overview; to see the forest but not the trees.  The sky was also consciousness, “a perspective that exalts control, reason, and will.”  He was King, “a man’s home is his castle”, husband, father (children as extensions of himself), expected his wife to run the household and parenting (while he was minimally involved), protective, generous, and trusting toward many of his sons and daughters (although his generosity was motivated by his desire to control them and was tied to his expectations of them), sought authority and power, risk taker, entrepreneur, focused and single minded (the eagle), alliance maker, philanderer, ambitious, pragmatist (not an idealist), accepted the world as it was and wanted his piece of it, never an intellectual nor introspective, didn’t waste time on other’s feelings or dwelling on the past, “Power is an aphrodisiac”, everyone was expendable to him, but there is no profit in making enemies, the “alpha male” who had his pick of females, women were a “perk”, not a good lover, not passionate and didn’t bother to try to please women.


Each archetype has two corresponding Tarot cards: one from the Minor Arcana, which shows the archetype at it's healthiest - it's the way we can manifest their power and energy. The corresponding card from the Major Arcana, on the other hand, is the divine gift of the spiritual realm that they're seeking to manifest through us.

The King of Wands is pure fire energy, but strangely enough, he has the least to do with actual creation and creativity. His forte is not in dreaming up ideas and implementing them himself, but in taking an idea and changing the world to match his vision. As such he is a natural leader and commander of all kinds of people. They flock to him to hear what he has to say and leave just as eagerly when he gives them something to do for him. The King of Wands is the ultimate leader, who looks forward to challenges because he enjoys the rush of adrenalin that solving a difficult problem can induce. He not only dispels his own fear but that of others, by ensuring them that they shall succeed. He is not all talk, though; when the going gets tough no one hangs in there longer than he does. The King of Wands has a deep and innate respect for other people, and his compassion extends farther than most people would expect. For a King, he has a remarkably good relationship with the common people. When he is unable to assist by himself, he will empower and enable others to help in his place. As with all of us, the King's faults emerge from his strengths. Most of the time he does not show enough restraint to know when assistance is not needed or wanted. He can sometimes make things even worse by doing what he thinks is the right thing - and he always thinks that what he is doing is the right thing. Most of the time his high sense of ethics proves him right, but in those few times where he is on the wrong side of the argument, he can do more harm than good. But one thing that can never be said of him is that he walks away from problems, whatever they are. He will defend another man just as vigilantly, if not more so, than he would protect himself.

The King of Wands invites us to act as he would to solve our problems. His vision is one of ideal reality, and his vision is that humanity might always be better than it is. He is the warrior of light who stands up for something that matters, and his appearance is an invitation for you to do so as well. If there is a cause you wish to support, but you are unsure of your position, you may proceed with the knowledge that your base of power is strong. Take your responsibilities seriously, think of new ways to do things, and never stop believing in yourself.

The sunflowers in the garden are not turned towards the Sun, as they normally are, but to the child on the horse. He is the one who now holds power over the material world. The great ordeal of the Moon has passed, and you have emerged into the light, stronger and wiser. War has ended and made way for peace; hatred is replaced by love; fear is overcome by courage. Good triumphing so powerfully over evil is not an everyday occurrence in this world, and when it does happen you should be glad that a little more light has entered your life. The rising of the Sun is akin to the completion of the tasks and trials of the night, and the warmth it provides is the reward for not cowering in fear at the darkness, not running away given the chance, and not trying to hide from the wisdom that is rightfully yours.

Success and completion; success comes if you are confident and bold in the use of your creative energy. Glow with the vitality of the Sun whose light is unmatched and whose power is absolute. Such power and clarity are within everyone's grasp, including yours, if you let the light of the Sun illuminate you. If there are areas of darkness lurking inside you, the Sun's rays will expose them so you can integrate them into yourself. Fogs of confusion are burned away with the Sun's fiery sword, and its flames drive away fear and all the terrors of the night. A seemingly hopeless situation will be hopeless no more once the Sun shines down upon the true path, the correct solution. When the Sun appears, let its power amaze and overwhelm you. But do not simply watch - reach up to grasp it, draw its power into yourself. The power of the Sun is true power indeed.