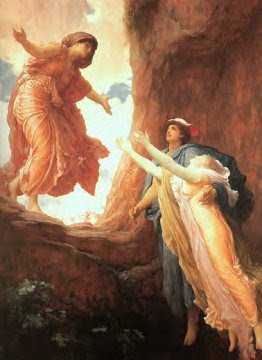 
Demeter in myth: A synopsis


DEMETER was the great Olympian goddess of agriculture, grain, and bread, the prime sustenance of mankind. She also presided over the foremost of the Mystery Cults which promised its intiates the path to a blessed afterlife. Demeter was depicted as a mature woman, often crowned and holding sheafs of wheat and and a torch.

Some of the more famous myths featuring the goddess include:

•The abduction of her daughter Persephone by Hades, and the great dearth she brought down upon the earth;
•The nursing of Demophoon, the young son of King Keleus of Eleusis;
•The journeys of Triptolemos, a hero sent by the goddess to instruct mankind in agriculture;
•Her assault by Poseidon who forcefully coupled with her in the form of a horse;
•The punishment of Erysikhthon who was cursed with an unquenchable hunger by the goddess for cutting down her holy grove.

Another vulnerable goddess.  Demeter is also relationship-oriented (and like Hera, dependent upon a significant other).  She had a need for affiliation, tended to experience powerlessness and responded with depression, accepting, diffuse awareness.  She was the epitome of the maternal, an instinct fulfilled through pregnancy or through providing physical, psychological, or spiritual nourishment to others, the provider (food and spiritual sustenance), nurturing, Mother Nature, generous, Lady Bountiful, dependent upon her maternal role (after which her life lost its meaning), solid, dependable, fertile, long-suffering, unconcerned with status, envious or jealous only with respect to children, mixed feelings about feminism and the women's movement, relied on women friends for emotional support (vice her husband), did not choose her mate, just as soon cuddled as made love, huggy, preferred breastfeeding to intercourse, and tried to be indispensable.

The Queen of Pentacles is a Queen of fertility and harvest, and her talents extend to mothering and nurturing as well and has the ability to sustain and care for all kinds of life. She is materially wealthy, but even that is superseded by the wealth she has build through kindness and generosity. The Queen of Pentacles is often a mother, but sometimes she will express motherly dedication and love despite having no children of her own. Her watery quality gives her the intuitive and emotional skills needed of a good mother, while the Pentacles suit gives her a solid schooling in material matters and affairs. Her ambitions center on the family and her goals are a happy material and emotional life. These simple goals are often difficult to obtain, but she devotes herself to them. Though not necessarily rich in terms of money, she is always rich of heart, and she shares her wealth with all those in need. Her only real weakness is an obsession with the security and protection that the Pentacles suit embodies, and this should come as little surprise because the Empress has trouble in this area as well. Although she sees no problem with expressing love with the creation of a happy home, some people seem to have a problem with that, and think she should "get a real job". A true Queen of Pentacles will tolerate such people, who obviously have no idea how "real" her job can become.

When the Queen of Pentacles inside of you starts manifesting, the signs are unmistakable. Generosity will become a priority, as will trustworthiness and reliability. You will gain insight into both matters of money and matters of the heart, and through these you can find a path to spiritual enlightenment. The Queen of Pentacles is, in many ways, a bridge between the worlds of the mundane and the spectacular. Step across that bridge once you are ready, and delight in the opulence and pure beauty.

The Empress represents the physical body and the material world. From her comes all the pleasure of the senses and the abundance of life in all its forms. She is also the mother archetype, and through her we get a first glimpse of the power of love in the Tarot. The world of the Empress is an ideal and perfectly beautiful place, totally natural, untouched by artificial colors, lights or sounds. This is a place of bounty and fertility, a living representation of the process of creation and birth that the Empress herself symbolizes. She doesn't just live in this place, she is this place. The Empress is no less beautiful than the flowers that throw their scent across her fields, no less fertile than the soil that lies underneath her throne. Her primary power, like the two Arcana before her, is the power of creation. But her creation is not based on creating the world she wishes to live in, or the person she wants to be, because she has that world and is that person. She creates life in all its myriad forms. The Empress is the archetype of the mother, the ultimate creator and giver of life; thus her associations can be extended beyond creativity into fertility, pregnancy and the daunting task of motherhood, which she always faces with a smile and a happy heart. She takes pleasure in all things, particularly her own creations - and everything in nature is her own creation. The empress also represents unconditional love - she makes no demands, sets no conditions, just loves everything equally and with all the power she can. From this, it can be said, derives her only real weakness, and it is something that all mothers deal with at some point. She is often over-protective of her creations, and wishes no harm to come to them at all. That would disrupt the eternal bliss and happiness of her realm.

Know also that the perfectly abundant world of the Empress is always free for you to enjoy. Even if you know that you have to go back to the "real world" eventually, a vacation from the hectic and artificial life that most people live these days will certainly be welcome. Spend some time outdoors, in the fresh air, enjoying every aspect of creation. And then, when you go back to where you were, the Empress' creative power and beauty will remain to inspire you and give you power. Strengthen your innate connection with the Earth's creativity and you will, by association, strengthen your own creative power. Cultivate your creativity and plants the seeds of a bountiful harvest.